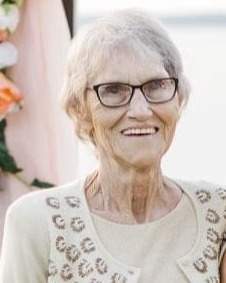 Services honoring the life of Tinker Louise Henderson Young will be held at 10:00 a.m., Wednesday, August 31, 2022, at Memorial Gardens North Cemetery in Blanchard, Louisiana. Mr. Jerry Waren will be officiating the service.

Tinker always let you know exactly how she felt about you and made sure to express how much she loved you at every goodbye. She was loyal and fiercely loved everyone around her. She would drop everything to be there for someone she loved. You could easily find Tinker on the porch with her dog Shotzy and a cup of coffee, tearing up the dance floor, or on the lake with a fishing pole in her hand.

She loved her family more than anything and enjoyed spending time with the whole family over a plate of fried fish and a glass of sweet tea. Once she became “Memaw,” her life truly changed. Coffee milk, and pancakes consumed her mornings, and teaching her grandkids about the New Orleans Saints filled her evenings. She was at every performance, game, awards banquet, and birthday party. It wasn’t unusual for the grandkids to be checked out from school early to play hooky and spend time with Memaw and Papaw without their parent’s knowledge.

She was preceded in death by her husband of 46 years, Charles Ray Young; brother, Arch “Buddy” Henderson and her parents.

The family would like to extend a special thanks to the staff at Hand in Hand Hospice Care and The Guest House for taking excellent care of Tinker in her last days and to her friends and the staff at the Holy Cross Villas.

To order memorial trees or send flowers to the family in memory of Tinker Louise Henderson Young, please visit our flower store.