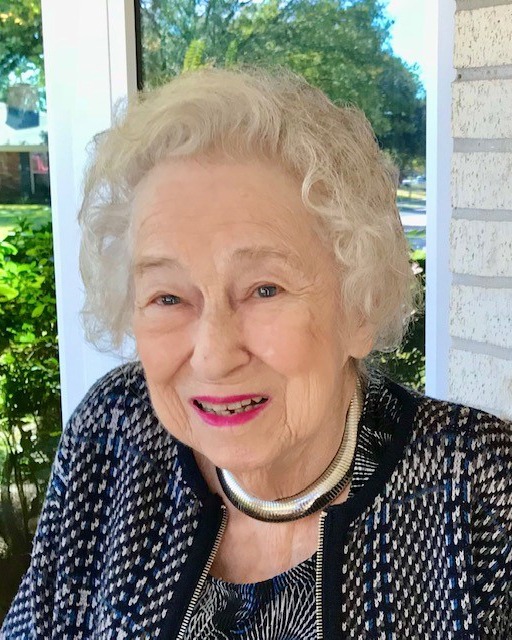 Ruth Nierman died peacefully at home on Thursday, October 13, 2022.  The matriarch of a large and loving family, Ruthie grew up learning the joys of family life from her parents, her dear sister, and her many aunts, uncles, and cousins in the place of her birth, Fort Worth, Texas.  Born on February 5, 1924 to Ray and Abe Gilbert, she became the sister of Pauline, known to her as Sister.  The two “Gilbert girls” as they were known married and lived in Shreveport for the rest of their lives, raising their families, and cementing the bonds of sisterhood that extended for more than 90 years for both of them.

Ruthie met Neal Nierman at a backyard birthday party when she was about 14 years old, and not long after, Neal told her he would marry her one day.  She told him she didn’t think so.  She was wrong.  He was in and out of her life over the following decade, and on April 18, 1948, they married.  Their marriage lasted 60 years until Neal’s death in 2008.   They had two children, Helaine and Ron, who have been fortunate to live in the same city with Mimi for their entire lives.  Memories abound in Mimi and Pappaw’s house:  Passover Seders, Thanksgiving dinners, birthday celebrations, and years of everyday life.  Helaine married Bill Braunig and Ron married Jackie Kern, and then Ruthie’s life took a turn that she could never have imagined: six adored grandsons (and their wives) and thirteen great-grandchildren, who all came to love Mimi.  She told wonderful stories of life in Fort Worth with an extended family that she kept up with throughout her life.  When her own generation passed on, she continued the family relationships with their children.  Her letter-writing blossomed in her later years, and even in July of this year, she wrote letters to the ten grandchildren who were at camp.  She wrote notes of congratulations and notes of condolence and thank-you notes for everything!

Ruthie was first and foremost a woman whose life centered on her family.  Her devotion to us all was manifested in her generosity, her intense interest in everyone’s lives, and her pride in our accomplishments.  She was a homemaker whose Coke floats after school were a treat and whose menus for Sisterhood luncheons at B’nai Zion always included chicken salad (no grapes added in those days), fruit salad with poppyseed dressing (Helen Corbitt’s recipe), and pasta salad.  Once she and Pauline hit on a menu they liked, they just stuck with it.  Ruthie was a volunteer for all the Jewish organizations in Shreveport, and she took special pleasure in visiting the homebound and welcoming newcomers to the community.  Some of the family’s closest friendships were orchestrated by Ruthie’s decision that “you should meet my kids.” She and Neal were leaders in the Shreveport Jewish Federation as well as lifelong members of B’nai Zion Congregation and Agudath Achim Synagogue.

Ruthie loved to garden, and for many years she planted hundreds of tulip bulbs in her front yard, hoping they’d all bloom at the same time.  They often did not, but she was never dissuaded from trying again the next year.  She loved all flowers, and she was well-known for taking flowers to friends to cheer them up.  Rather than sending flowers to her family at this time, we ask that you remember her by giving a bouquet to someone whose day you can brighten.  If you’re a cook rather than a gardener, you can take soup to someone.  She was known for that as well.

A memorial service for Ruthie will be held at 2:00 p.m. on Sunday, October 16, 2022 at B’nai Zion Congregation, 245 Southfield Road, Shreveport, LA. 71105. The service will be officiated by her grandson, Rabbi Jordan Braunig, assisted by Rabbi Dr. Jana L. de Benedetti.

The family would like to thank Brenda Russell, Liz Williams, and Linda Mitchell for their loving care of Ruthie. Also to Rillia Hall and Pat Smith for many years of care and friendship. We thank St. Joseph Hospice and Carol Cason for helping us navigate this difficult time.

To order memorial trees or send flowers to the family in memory of Ruth Gilbert Nierman, please visit our flower store.