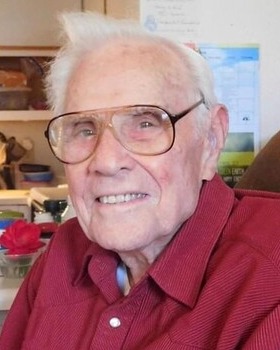 Roy Buckner was born July 28, 1921. He went to be with his Lord on December 22, 2022. He was 101 years old. He left this life gently with family by his side. Mr. Buckner was a man of strong convictions having lived a life devoted to his Christian faith, his family and his country. He was born in Center, Texas to Carl C. and Lettie Buckner. He was one of eight children, four boys and four girls. It was a simple life where he and his siblings helped their father farm the land. There were hardships and little money but his was a close-knit family who worshipped God and believed in service to others.

After high school he worked in a soda shop in Beaumont, Texas. Shortly before World War II, he and his twin brother, Ray, joined the US Marines on April 1, 1941. Within months, Pearl Harbor occurred and he, Ray and his two other brothers served in the South Pacific. Together they fought on Guadalcanal and Bougainville. Ray was killed in combat during their time on Guam. This was a heartache Roy carried with him until his death. He remained to fight beside his other two brothers on Okinawa and Saipan until the war ended. Mr. Buckner was awarded the Bronze Star for outstanding service to his country.

After the war, Roy attended Chenier Business College where he met and married his sweetheart, Bette Grace Sheffield. Their union lasted for 65 years. He traveled across this country working in sales. He and his brother owned car lots in Texas and Louisiana. He opened the first Honda motorcycle dealership in Shreveport and managed Honda South for many years. He worked for Midway Manor Nursing home until he retired. He and Bette had three children. Although his soul was that of a Marine, and he proudly served his country, it was his family that he cherished most. His obvious love for his grandchildren and his great-grandchildren was what fulfilled him in his later life. Mr. Buckner was a member of the Baptist faith and served as a deacon. His Bible was never far from his chair. He always said spending time in the word of God was his favorite thing. Roy loved working in his garden. He took delight in watching his hummingbirds. He loved talking politics and listening to his Sunday preachers. Saturday night was reserved for Lawrence Welk with his wife, Bette. A gifted storyteller, everyone seemed to enjoy his humble stories of growing up during the great depression. He touched so many with his kind ways and wisdom of 101 years. He was always grateful, always thankful. He loved his life, but he would tell you not to grieve him too long as he is now delighted to be with his Jesus, his beloved wife, his family, and comrades who went before him.

He is preceded in death by his parents; siblings; his wife, Bette and son, Ray W. Buckner. He is survived by his sister, Mildred Staley; daughters, Sandra Stentz and Terri Pawliski (John), and Debbie Buckner (Ray).

To order memorial trees or send flowers to the family in memory of Roy Timon Buckner, please visit our flower store.