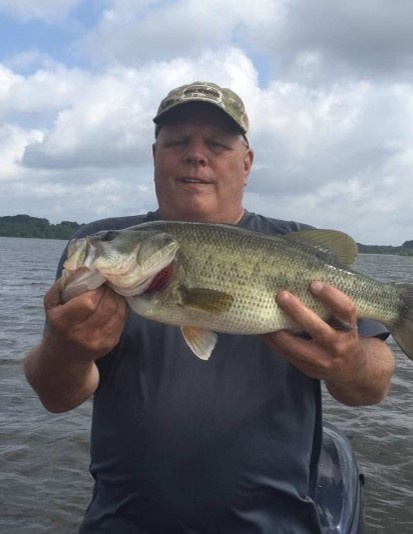 A memorial service celebrating the life of Johnny will be at First Baptist Church in Mansfield, Louisiana, on Thursday, April 21, 2022, at 12:00 p.m. A visitation will be held from 11:00 a.m. until the time of service. Officiating the service will be Dean Register. On July 12, 1962, in Monroe, Louisiana, Robert John Peterson, Jr., was born to Robert John Peterson, Sr., and Betty Jean Prothro Peterson. On April 16, 2022, God said, \"Son your work on Earth is done\" and took him home to heaven where he was reunited with his parents and mother-in-law, Janis Wall, as well as a host of family and friends. Those left to cherish his memory and the legacy he left behind are his wife of 20 years, Gina, son, Trenton of Rifle, Colorado, Brandon and wife, Caitlyn of Stanley, Louisiana, sister, Lea Anna, and Jack Guy, niece, Hayley Murphy, and Matt; great-nephew Bishop, all of Mansfield, Louisiana, grandchildren: Jackson, Karlee, Rylee, Charli, Grayson, Krue, Sarie, and Slade, all of Stanley, Louisiana, father-in-law, Kenny Wall of Grand Cane, Louisiana, and his extended family, Carrie Jo and Nick, Chance and Piper, Ryan, Ali, and Palin all of Stanley, Louisiana, as well as other family members and a very large circle of friends. Johnny loved his family. He was by far the strong one and the glue that held us together. Johnny was a devoted husband, no matter how big or how small the problem Gina may have gone to him with, he took care of it, now that\'s not to say that he didn\'t have a sarcastic comment about it, but his love for her ran deep. Johnny had the pleasure of watching Trenton grow into the man that he is, cheering him on from the sideline of whatever sport he was involved in, teaching him how to shoot a gun, a bow and arrow, taking him hunting and teaching him many other life skills as well. Some of his greatest joys were spending time with his grandchildren, who all held a special place in his heart, as he did theirs. Johnny worked most of his career in the energy field, with Cleco Power, here in Mansfield and Entergy Corp., in Perryville, Louisiana. On January 31, 2022, he retired from Entergy, and on February 7, 2022, he began training for the next chapter of his career with FieldCore. Johnny had a work ethic like none other, he was a hard worker, he could fix most anything, and if he couldn't, he could figure it out, he took pride in his work, and gave it 150% and then some. Some of those that worked with him would tell you that there wasn't a better person to work with, if there was a big project going on, he was right there in the mix getting his hands dirty as well, putting in long hours, because if there was something to be done---well, you just got it done. Johnny has been known to work extra shifts so that a coworker could be home with their family on Christmas morning or be at their child\'s birthday party or ball game. Johnny had a huge heart. He never met a stranger and would give you the shirt off his back. If someone in need called him, he was there or would make a few calls. He would say \"Don\'t worry man, I got it.\" Over the years, he mentored many, not only at work, but at the deer lease, on a golf course, or on the lake fishing. No matter where he was or what he was doing he left an impression. He was once the subject of a middle school student\'s essay titled \"Who I Admire the Most\". Johnny always had a good story to tell, and he could retell a story that would definitely bring a big round of laughter. All those that knew him have a \"favorite Johnny story\" that is sure to bring a smile to your face and a good laugh or two. Johnny was everybody\'s friend, whether you knew him for years or just a few days. You always knew where you stood with him, as he had a way with words. Johnny was an organ donor, a part of him will live on and he will forever be in our hearts, --- till we meet again! In lieu of flowers, the family suggests memorials be made to St. Jude\'s Children Research Hospital, 501 St. Jude Place, Memphis, TN 38105, of which he was an avid supporter, or to the charity of your choice.
To order memorial trees or send flowers to the family in memory of Robert John Peterson, Jr., please visit our flower store.
Send a Sympathy Card