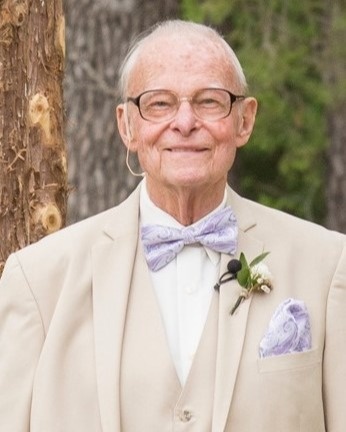 Funeral services celebrating the life of Robert H. “Bob” Grout, 90, will be held at 3:00 p.m. Monday, October 10, 2022, at Rose-Neath Funeral Home, 2201 Airline Drive, Bossier City, Louisiana. Visitation will be from 2:00 p.m. until 3:00 p.m. Burial to follow the service at Rose-Neath Cemetery, 5185 Swan Lake, Bossier City, Louisiana. Officiating the service will be Pastor Justin Haigler. Officiating the graveside service will be Pastor Arthur Vance.

Bob passed away on October 5, 2022. He was born June 27, 1932, in Downers Grove, Illinois, and moved with his family to Williamsville, New York, when he was a teenager. After high school, he attended Bethany College in West Virginia and then was drafted into the Army. He went through basic training at Folk Polk, Louisiana, and served his country in Korea.

After being discharged from the Army, he attended Bowling Green State University, where he was a member and served as president of the Theta Chi Fraternity. After graduation, he was employed by Western Electric in Winston-Salem, North Carolina.

While on a fishing vacation with his father at Viamede Resort on Stoney Lake in Ontario, Canada, he met Isabel McColl and proposed to her ten days later. Following a whirlwind courtship, they were married six months later and celebrated their 60 anniversary in January of this year.

The couple resided in Winston Salem, North Carolina, for several years, where their two children were born. He moved his family to Shreveport, Louisiana, in 1965, even after swearing he would never return to Louisiana after his summer of basic training at Fort Polk. He was the section chief in Labor Relations at Western Electric, now AT&T, and retired after 34 years of service. While working full-time, he attended Louisiana Tech University and earned a master’s degree in Psychology.

He was an active member of John Calvin Presbyterian Church in south Shreveport for over fifty years and could often be found behind the pulpit as a lay minister. One of his proudest moments was officiating at his granddaughter’s wedding service.

He will be remembered for his love and faith in God, dedication to his community, and his sizable humor and wit. He was the epitome of a Southern gentleman and a devoted family man. After retiring from AT&T, he enjoyed traveling, preaching, spending time with his grandchildren, and returning to his favorite place, the family cottage on Stoney Lake in Ontario, Canada, every summer, where he enjoyed afternoons on the dock, happy hour in the screened porch and playing cards with family and friends in the evening.

In August 2015, he was diagnosed with Non-Hodgkin’s Lymphoma and underwent extensive chemotherapy.  With a strong will, faith, family, and medical support, he has been cancer free for almost seven years.

In lieu of flowers the family suggests that memorials may be made to St. Jude Children’s Research Hospital, 262 Danny Thomas Pl, Memphis, TN 38105.

To order memorial trees or send flowers to the family in memory of Robert H. "Bob" Grout, please visit our flower store.