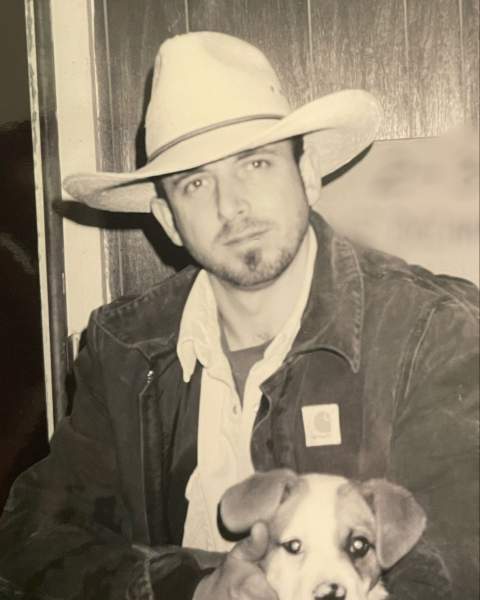 Robert Christopher De Champlain was born April 19, 1967. He died on August 28, 2022. Rob was the second of three boys born to Ronald and Joyce Ann (Shauna) De Champlain. His parents divorced a couple years after he was born and about 7 years would pass before his mother would meet and marry James (Jim) Fred Kyle. That intervening period was very hard on the three boys and not without its trauma. Now, no family lacks its own drama, but with Jim Kyle filling the “dad” role Rob and his brothers had a proper home. A baby sister (April Kyle) was added to the number within the year followed by another sister (Jamie Kyle) a couple years later. The family lived in the Joaquin, TX, area early on and moved to the Logansport, LA, side of the Sabine River as Rob was going into middle school. Rob volunteered with the Logansport VFD/ambulance while attending Logansport High School. He loved the fulfillment that came from working with a team to help neighbors in need. That same caring and generous nature was a mark of his character his entire life.

With his friends and co-workers, Robert went by the name “KOJAK,” thanks to the shininess of his hairless head. His siblings called him Robbie (or “turtle” if you go back 45 years). But the name he most loved to hear was “dad,” spoken by his children. Rob had quite the sense of humor and always kept his kids laughing with his never-ending jokes and silly antics. Despite battling lifelong asthma, Rob worked hard to excel at the physically demanding job of rigger/crane operator and enjoyed a reputation in the business for being hardworking and a knowledgeable problem solver. Though work kept him away from home for long periods he did what he felt he needed to do to provide for his family and always looked forward to “shut down” completion so he could return to his children and to doing the things he enjoyed – being outdoors, hunting, shooting, gardening, grilling, “mud-hoggin,” etc. Rob loved riding four-wheelers, “doing’ donuts with Dylan,” building forts, playing outside, playing golf, tickling, and “wrestling” with his kids. Rob often shared that his fondest memories were always of time with family; either as a child or as a dad and he could regale anyone with excruciatingly exacting detail on either...

An internment of Rob’s remains will take place at a date to be determined at Old Center Cemetery. We would love for those who loved Rob and Rob’s family to be in attendance.

For those inclined, the family is asking that a gift be made to the Smith County (TX) Alzheimer's Society in Rob’s name.

To order memorial trees or send flowers to the family in memory of Robert Christopher DeChamplain, please visit our flower store.