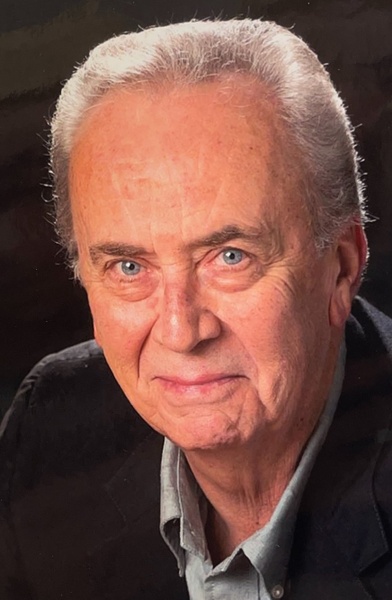 Richard Sloan Folmer was born on February 13, 1942 in Cortland, New York, to Louis and Elizabeth Folmer. Richard passed away on Tuesday, January 11, 2022 at the age of 79 after a brief illness. A visitation will be held from 5:30 p.m. to 8:00 p.m. at Kilpatrick's Rose-Neath Funeral Home, 1815 Marshall St. in Shreveport, Louisiana on Friday, January 21, 2022. A memorial service honoring his life will be held at 2:00 p.m. on Saturday, January 22, 2022 at First United Methodist Church, 500 Common St. in Shreveport, Louisiana. A consummate actor, director, teacher, and mentor, Richard's love for the art of theatre was only surpassed by his love for his bride, Ginger Darnell Folmer. Married in 1965, Richard and Ginger weathered many challenges including life on tour; the untimely death of their only child, Eric Sloan Folmer in 2017; and, more recently, Ginger's cancer diagnosis and treatment. Richard looked to the future and would have undoubtedly agreed with Alan Rickman when he said, "Actors are agents of change. A film, a piece of theatre, a piece of music, or a book can make a difference. It can change the world." After his debut as the lead in Little Lee Bobo: Chinatown Detective, Richard's acting career began in earnest when he played Hamlet at the age of 16 while a student at Homer Central High School, followed by an apprenticeship at the Sacandaga Summer Theatre. A graduate of Syracuse University with a Bachelor of Arts degree in English, Richard went on to obtain a Masters of Arts degree in Theatre before entering his Fellowship at the Hillberry Classic Theatre at Wayne State University. Richard's acting career included a variety of notable stage plays, television programs, and films. Locally, he was beloved by all audiences. He kept them spellbound with his portrayals of such well-known characters as Tevye in Fiddler On the Roof; Zorba in Zorba the Greek; Harold Hill in The Music Man; Henry Higgins in My Fair Lady; Willy Loman in Death of a Salesman; and, Norman Thayer in On Golden Pond -- a show that held a special place in his heart as he was joined onstage by his wife, Ginger, playing the role of Ethel. Not content just to capture audiences' hearts onstage, Richard also directed countless productions, winning awards for Best Director for The Odd Couple and My Fair Lady, for which he also won an award for Best Actor. His performance as Norman Thayer in On Golden Pond, earned him an SLT Bravo! Award for Best Actor. In 1989, Richard took on the position of Artistic Director at East Bank Theatre and held that position for the next 21 years, directing numerous shows. His television and film credits include supporting roles on Longmire; Walker, Texas Ranger; Cut to the Chase; Straw Dogs; Factory Girl; and Mad Money. In concert with his professional acting engagements, Richard worked with such notables as Sid Caesar, Dorothy Lamour, and Zero Mostel. Constantly eager to share his passion, Richard co-founded The Company Repertory Theatre, which sent actors into schools and nursing homes around the region, bringing joy to hundreds of people who may never have had an opportunity to experience live theatre. Richard is preceded in death by his son, Eric Sloan Folmer; parents, Louis and Elizabeth B. Folmer; grandmother, Annie Merle Westbrook; sister-in-law, Carol Folmer; mother- in-law, Iralene Peavy; and his father-in-law, Printice A. Darnell. Left to cherish his memory are his beloved wife, Ginger Darnell Folmer; brother, John B. Folmer, Esq.; niece, Tiffany F. Lawrence and husband, Dewey; niece, Carolyn Lawrence and nephew, Spencer Lawrence; nephew, Todd James Folmer; sister-in-law, Lynette Pace and husband, Randy; sister-in-law, Niecy Bass; first cousins: Donnie Westbrook; Kathy Bayne and husband, Bill; Ric Whetstone, M.D. and wife, Teri; Branton and Jenny Whetstone; Mary Nell Westbrook; Robert Westbrook and wife, Glenda; Michael Westbrook; nephew, John Pace; niece, Dawn D. Gonzales and husband, Anthony; and niece, Mona Pace. Honorary Pallbearers will be Dr. Ric Whetstone, Branton Whetstone, Lane Crockett, Joe Todaro, Meade Patton, Alan Berry, Trey Jackson and Mike Knutsen. In lieu of flowers, the family suggests memorials be made in Richard's honor to any one of the many local theatre groups. Ginger wants to thank all the wonderful friends who have showered her with their love and affection during this difficult time, including Anna Maria Sparke, Meade Patton, Melina Keele, Shawn Dion, Denise Dion, Renee Dossett, and Cara Derrick. "When he shall die, Take him and cut him out in little stars, And he will make the face of heaven so fine, That all the world will be in love with night." -Romeo and Juliet by William Shakespeare
To order memorial trees or send flowers to the family in memory of Richard Sloan Folmer, please visit our flower store.
Send a Sympathy Card