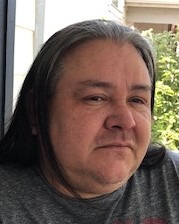 Ralph Spencer Carey, 50, passed away after a brief illness on January 6, 2023, at Willis Knighton North Hospital in Shreveport.  He was surrounded by his three sons and his mother.

Ralph was born on May 19, 1972, in Aguadilla, Puerto Rico to Spencer Dale Carey and Evelyne Eickrodt Carey.  Ralph lived most of his life in Shreveport, Louisiana. He was very proud of his Puerto Rican and Native American heritage.  Ralph attended Southwood High School and Bossier Parish Community College.  He received his diploma in HVAC from Ayers Institute.  Most of his career was spent in HVAC maintenance.  Ralph also created beautiful artwork on canvas and on ceramic tile. He enjoyed the outdoors, going fishing, hunting, and motorcycle riding.  He loved spending time with his children.  Ralph has been a member of First United Methodist Church since childhood.

Ralph was preceded in death by his stepfather Thomas James Epperson.  He is survived by his sons, Aaron Carey (Heavenly), Christopher Carey, and Tyler Carey; his mother, Evelyne Epperson; his father, Spencer Carey (Pam); his brothers, Andrew Epperson (Tonia) and Matthew Epperson; his sister, Karen Epperson Winters (Tom); and several nieces and nephews.  He will always be in our hearts.

The family wants to thank Doctors and Nurses at Willis-Knighton Hospital for caring for their loved one.

A reception celebrating Ralph’s life will be held in Shreveport at First United Methodist Church, Head of Texas Street on Sunday, February 5, 2023 at 1:00 p.m., followed by a memorial service and inurnment at 2:00 p.m.  In lieu of flowers the family suggests memorials may be made to First United Methodist Church in Shreveport, 500 Common St, Shreveport, LA 71101 or a charity of your choice.

To order memorial trees or send flowers to the family in memory of Ralph Spencer Carey, please visit our flower store.