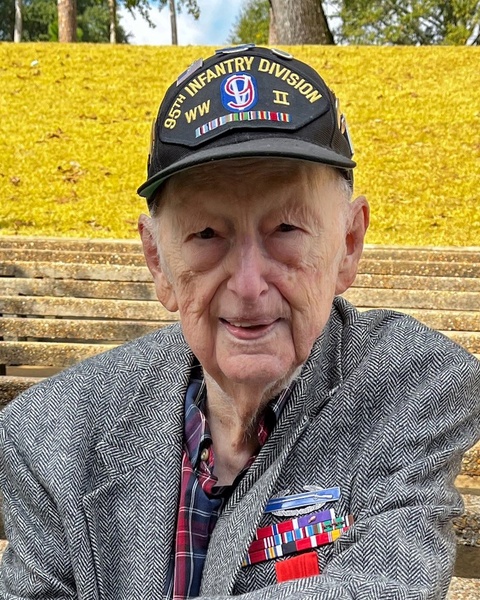 Funeral services honoring the life of Paul Hilton Madden, Jr. will be held at 1:00 p.m., Saturday, April 30, 2022 at Centenary College of Louisiana's Brown Chapel on Woodlawn Avenue, Shreveport, Louisiana. Officiating the service will be Reverend Lindy Broderick. Visitation will be held prior to the service at 12:00 p.m. until 1:00 p.m. at the chapel. Interment will immediately follow the service in Forest Park Cemetery, 3700 St. Vincent Avenue, Shreveport, Louisiana.

Paul Hilton Madden, Jr. was born June 12, 1925 in Homer, Louisiana to Paul H. Madden, Sr. and Jewel Westmoreland Madden and passed away, Tuesday, April 26, 2022 in Shreveport, Louisiana. Paul grew up in Shreveport and joined Troop 4 of the Boy Scouts in 1937 and earned the rank of Eagle Scout in 1939. He graduated from C.E. Byrd High School in 1942 and went on to proudly serve in the United States Army in Company A, 379th Regiment, 95th Division - The Iron Men of Metz during World War II. He received the French Legion of Honor (Chevalier), Bronze Star, and the Purple Heart with Oak Leaf Cluster. After the war he graduated from Centenary College of Louisiana with his Bachelor of Science in Business in 1947. After graduation he went to work for United Gas which was acquired by Pennzoil. He retired in 1986 as a Senior Petroleum Landman after 39 years.

Paul married the love of his life Phyllis Westall on September 18, 1948 and had two sons. He was a lifelong Methodist and sang in the choir for many years with his beloved wife. He has been a member of Broadmoor United Methodist Church since 1967. He was an Adult Scout Leader who served in many positions in the local NORWELA Council. He earned the Silver Beaver Award, attended two World Jamborees, seven National Jamborees, and made two treks to Philmont Scout Ranch. Paul enjoyed volunteering at the Centenary Book House for 34 years and was named a Distinguished Alumni and Volunteer of the Year by the Centenary Muses.

"This brilliant, passionate man was the epitome of all of the Army's Values-Loyalty, Duty, Respect, Selfless Service, Honor, Integrity and Personal Courage and I know I shall not meet another like him in my Lifetime." - Major General James Archer (Ret.)

He is preceded in death by his parents; his loving wife of over 63 years, Phyllis Westall Madden; and grandson, Paul Frederick Madden.

To order memorial trees or send flowers to the family in memory of Paul Hilton Madden, Jr., please visit our flower store.