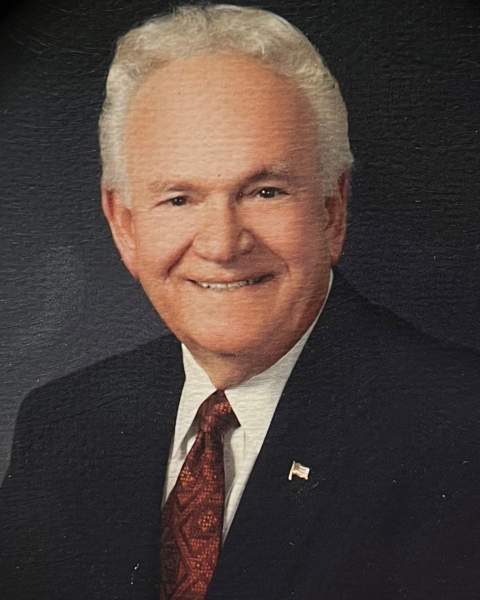 Oscar Lionel Smith finished his race and entered Heaven’s gates on September 9th, 2022 at the age of 87.

Lionel, also known as “Papa”, was born on September 20, 1934 in Haynesville, Louisiana to Oscar “Jack” Smith and Virgie Odell Lamb. He graduated from Bossier High School where he played varsity football and went on to graduate from Louisiana Tech with a degree in Business Management.

Upon graduation, Lionel worked with his father until his father retired in 1963.  During his time under his father’s tutelage, Lionel met and married the love of his life, Jo Ann Page on November 20, 1955. They were blessed with 3 beautiful children, Rhonda Renee, Robert Keith, and Kathryn Jo.

After his father’s retirement, Lionel proudly took over the family’s sheet metal and HVAC company which employed hundreds in the community. He poured his heart into his family business which allowed him to branch into many other businesses through the years. Lionel was an avid businessman who loved to work, loved his family and loved his community. He worked hard to serve those he loved and wanted to make a big mark on the world.

Lionel was an active community leader serving on numerous Board of Directors. He used his success to give back to his church and almost anyone who needed a hand. After many decades in Bossier City, he and Jo Ann ventured to Dallas, Texas where he founded several healthcare companies. Lionel was at the forefront of healthcare billing technology and developed software that provided major advances in how billing and coding is done today. He retired in 2007 after more than 4 decades of service to his companies and communities.

Lionel loved big and lived an extraordinary life. He traveled the world with Jo Ann, collecting artifacts and long-lasting memories throughout his life. He adored his children, grandchildren and great-grandchildren. He loved watching the Dallas Cowboys and sneaking bites of Honey-Baked Ham before family dinners. He was a generous, kind, and gentle man who will be greatly missed.

Lionel was greeted in heaven by his parents, Jack and Odell, his son, Robert Keith, and brothers, Douglas Wayne, and Stanley Keith.

To order memorial trees or send flowers to the family in memory of Oscar Lionel Smith, please visit our flower store.