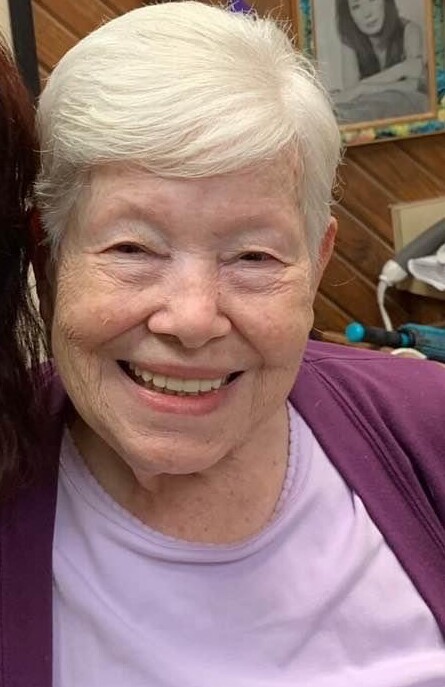 Orpha was born April 24, 1937, to Hamilton and Betty (Vaughn) Potter in Glendale, Oklahoma. As a child, she moved all over the country a handful of times, following her father in the U.S. Navy. After losing Hamilton in WWII, Orpha’s mother moved them back home to Oklahoma. She graduated from Wister High School and studied at the local junior college.

While in the band at college, she met her husband, Roger W. James.  He played the trombone, and she played the oboe. Together they had three children, Roger, Cindi, and Lisa. No stranger to military life, Orpha raised her family as a U.S. Air Force wife all over the country and a few years overseas - living in Biloxi, MS, Wichita Falls, TX, Japan, and finally, Bossier City, LA.

In the mid-1970s, Orpha decided she’d like to get back to work since her children were all in school at that point. She worked at several places in town - Saundra’s Garment Factory, M’Levy’s Department Store, Rubenstein’s, and Shreveport Federal Bank. All of these businesses have one thing in common, they shut down while she worked there. A running family joke was, Orpha could not go work at any other businesses, or they might shut down too.

Orpha enjoyed sewing, painting, gardening, and baking in her younger years. Unfortunately, she developed Macular Degeneration, and she was slowly losing more and more of her vision as the years passed, ultimately becoming legally blind. She could, however, see a little better than her grandkids thought sometimes.

Mamaw, as her grandkids and great grands referred to her, will always be remembered for her willingness to listen to all of their stories and the latest happenings in their lives, be them big or small, having the best snacks and an open door with a seat at the table anytime.

She took much pride in her grandkids and great-grandkids, especially. In recent years she thoroughly enjoyed spending much of her time with two of her great-grandbabies, Collin and Marshall. She could sing all the nursery rhymes and even make them up as she went along while the babies danced or jumped on her bed. She looked forward to sitting down to lunch with them during the week, sharing her cookies, and giving rides on her walker.

To order memorial trees or send flowers to the family in memory of Orpha Glynn James, please visit our flower store.
Send a Sympathy Card