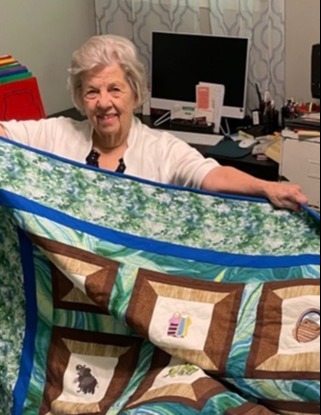 Norma was a high school graduate from Fair Park High School in Shreveport, Louisiana.  She attended Meadows-Draughn Business College and entered the work field at the Louisiana Ordinance Plant in Minden, Louisiana as a secretary and later became the office manager for Dr. Ollie Williams.  Her hobbies were cooking, sewing, designing and creating stained glass, directing church choir and teaching music.  Her greatest passion was teaching children how to sing and sharing their voices with audiences in churches and nursing homes.  She loved studying the bible and its history of characters and telling bible stories to be passed down through her family.

Norma Fae’s family lovingly called her Meme.  She spent her summers teaching “the kids” how to sew, macramé, cook, play the piano and even homeschooled 2 of her great-grandchildren.  There was never a day of boredom at Meme’s house.

Fae was married in 1949 to Ted Gates, husband and best friend for 72 years.  She raised their 3 children, daughter Linda, daughter Cynthia, and son, Jerry, in Keithville, Louisiana on a 5 acre homestead she and Ted built from the ground up.  There they raised horses, cows, pigs, and chickens, many of them for competition in 4-H projects.

To order memorial trees or send flowers to the family in memory of Norma Fae King Gates, please visit our flower store.