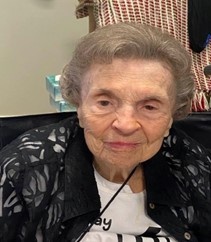 Nelva Evelyn Dunn O’Dell played her final hymn on this earth on July 28,2022.  Her journey of life has been a wonderful chorus of music to many. A graveside service will be at 9:00 a.m. on August 13 at Garden of Memories Cemetery in Minden, LA followed by a service of celebration at 11:00 a.m. at First United Methodist Church, Minden, LA.

Nelva was preceded in death by her parents, Walter and Bessie Dunn; M. S. “Digger” O’Dell, Jr. (her husband of 68 years); and her two daughters, Karen O’Dell Eskew and Sharon O’Dell Hulse.

Nelva was born in Roby Texas on December 5, 1926.  She met Digger at work at the KICA television/radio station in Clovis New Mexico. They were married on May 5, 1948. In 1962, Nelva and Digger packed up all they had and moved to Minden as Digger bought KASO Radio with Bo Cook. She taught kindergarten at St. John’s Episcopal Church for a few years when first moving to Minden. Nelva was known as “The Methodist Nun.”  She carried this title with pride as she loved and was committed to the United Methodist Church as much as any nun loves the Catholic faith. Church, Family, and Music (in that order) were the joys of her life. She began playing the piano for church as a teenager and continued playing well into her 90’s at all occasions. Nelva served as organist at First Presbyterian and First United Methodist in Minden.   She and Digger served as youth counselors for many trips with the Methodist Youth over the years. Nelva’s home and table were always open to those who needed a place to stay or a holiday meal. She became a surrogate mom to many young women and children needing a place to live and encouragement.  “Mama Nell,” as she was known by her family, loved to spend time with family.

To order memorial trees or send flowers to the family in memory of Nelva Evelyn O'Dell, please visit our flower store.