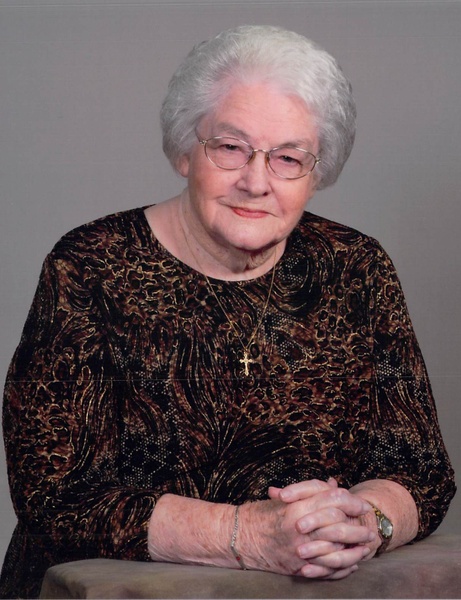 After a life well lived, Nellie Louise Jones Grisham passed away peacefully at home in Benton, Louisiana on July 13, 2022. Funeral services will be held on Monday, July 18, 2022, at 10:30 a.m. at Rose-Neath Funeral Home, 2201 Airline Drive, Bossier City, Louisiana. Visitation will be held from 6:00 p.m. until 8:00 p.m. Sunday, July 17, 2022, at Rose-Neath Funeral Home. Officiating the service will be Reverend Brad Franklin and Reverend Bill Moon. Burial to follow at Lay Cemetery in Benton, Louisiana.

She was a lifelong resident of Benton, one of the few remaining original Bentonites, and the last surviving child of Jesse Earl Jones and Georgia Magnolia Bryan Jones. Louise was born October 16, 1930, in Benton, Louisiana just across the railroad tracks from what is now the Benton Middle School. She attended Benton Elementary School and was a proud graduate of the Benton High School’s Class of 1947. Following graduation, she attended Norton Business School but only completed six months before being hired by Mr. Wray. She worked six years for Wray Ford before leaving there to work part-time at the Bank of Benton for the late Sonny Dunham. During her child-rearing years, she was a stay-at-home mom and did the books for her husband’s farm and cattle business. Once her children were grown, she was proud to work as a bus driver for the Benton Schools. She also worked as the financial secretary for Benton United Methodist Church. She worked in this capacity until her mid-80s when she had to stop to care for her late husband.

In March of 1949, she married Jack N. Grisham. After being married for 11 years and enjoying everyone else’s children, having their own children was what they wanted most. They began their family by adopting two children. As with many other couples, she too, then conceived two more children and had a house full of stairstep kids. With four prized possessions, her world was complete and her heart was full. It wasn’t until 1978 when she took on her second most cherished role as Mimi. Over the next 44 years of her life, she welcomed six grandchildren and eight great-grandchildren. She loved and cherished every moment spent with them, especially at Christmas time. She and Jack were married just two months shy of 64 years when he died in 2013.

Louise loved to travel the world even though Jack did not. Her love of travel began with her mother-in-law and sister-in-law. She continued to instill this love of travel in her children. Each year, she would meticulously plan an amazing summer trip, which provided a hands-on education and amazing experiences. She did this by loading her Ford with four small children, herself, and her trusty wooden paddle. Driving all over the United States she created unending cherished memories. As her children grew older, she began to travel with her sisters and a niece. They traveled to such wonderful places as China, Alaska, Europe, Italy, Germany and Israel.

When not traveling, she enjoyed baking/cooking, genealogy, and reading. The whole town knew she cooked a large lunch and supper daily. There were many days that she would look up to an opening back door followed by, “What’s for lunch, Miss Lou?” Her table was always open to anyone who walked in.

Louise was a devoted Christian and avid supporter of her church, Benton United Methodist Church. She served on the Board of Trustees and numerous committees throughout her years. She was a member of United Methodist Women and the Eva Smith Sunday School Class led by Betty Russell, where she loved studying the Bible. In 2019, she was one of three women recognized as the longest-living member of the UMW group.

The family wants to sincerely thank Liz Taylor, Glenda Britt and Toya Green for their endless hours of love and care. You took care of mom and loved her as if she was your own. We love you for that and will never be able to thank you enough.

The family suggests that memorials may be made to the Benton United Methodist Church Building Fund, 4615 Palmetto Road; Benton, LA 71006.

She is more precious than rubies; nothing you desire can compare with her. Long life is in her right hand; in her left hand are riches and honor. Her ways are pleasant ways, and all her paths are peace. She is a tree of life to those who take hold of her; those who hold fast will be blessed.

To order memorial trees or send flowers to the family in memory of Nellie "Louise" Jones Grisham, please visit our flower store.