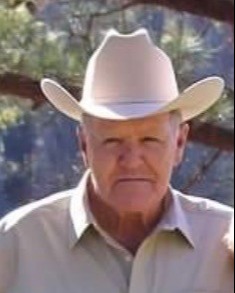 Mayo was born November 19, 1939, in Pleasant Hill, LA.  He was a legendary cowboy, who loved to work cattle and rodeo.   Mayo worked for different ranches over the years and oversaw several individuals’ cattle. He was always willing to lend a helping hand if someone called with a cow out or just needing help. Up until his passing Mayo hauled cattle for Center Livestock, where on sale day you were sure to see him sitting on the bench out front visiting with everyone then, on the front row to watch the sale.  He had so many accomplishments in the rodeo world.  Known for being one of the best pick up men and inducted in 2001 to the Louisiana Rodeo Cowboys Association Hall of Fame.  Mayo was also a calf roper and heeler and won so many different titles and events.  He loved to spend time in the roping pen turning out calves.  The highlight of Mayo’s life was spending time with his family.

(Mayo, Daddy, Poppa) you will be deeply missed and forever in our hearts

To order memorial trees or send flowers to the family in memory of Mayo Cobb, please visit our flower store.