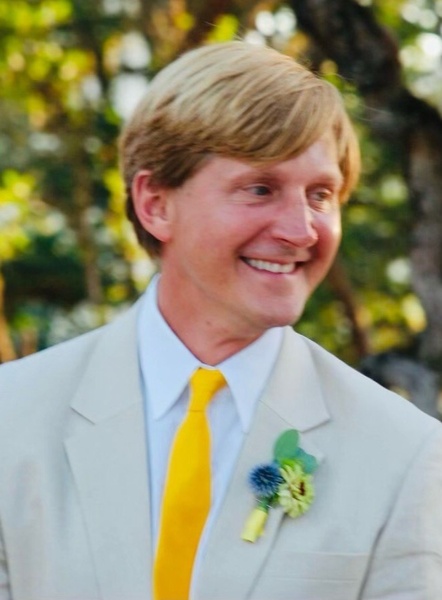 Lewis Kalmbach passed away at home in Shreveport, Louisiana on Sunday, July 17, 2022.  He was born July 22, 1961, as the son of Susan Forrester Roberts and the late Francis Terrell Kalmbach.   Lewis grew up in Shreveport and graduated from First Baptist High School. After earning his BFA in 1983 from Rhodes College in Memphis, TN, he embarked on a career that took many forms, each creative and successful.

He co-founded Louie/Lewis, an advertising agency in Shreveport shortly after college. The business became Kalmbach Advertising and then Kalmbach Smith Meadows, which still operates today. Lewis continued to work as an advertising and media consultant throughout life, built a floral design business when living in St. Louis, MO, and was most recently flipping houses in various areas of the country where he and his family resided.

He was a talented artist and an arbiter of good taste. Within his family, Lewis was the go-to for all decorating and design matters.  He was the driving force in creating Artport, a recurring exhibition of regional artists at Shreveport Regional Airport.

Lewis was also an inveterate traveler.  Prior to expanding their family, he and his husband Greg took several months to travel around the world.  He had a special fondness for his visits to South America and Asia – Thailand and India, in particular. He also loved Navarre Beach, FL, and trips there with family and friends brought him a special peace.

Upon moving back to Shreveport in 2020, Lewis renovated a building in downtown Shreveport to be Big Sun Studios.  His vision was that it showcase regional artists’ work, serve as a venue for community events, and house his nephew Julian Tizian’s growing video production business.

Lewis was a generous patron of many charitable causes, including funding scholarships to Southfield School in Shreveport. He was also a strong supporter of Shreveport’s Philadelphia Center from its inception.

Lewis is survived by his partner of 30 years and beloved husband, Gregory Alan Ott, as well as the light of their lives, son, Jasper Kalmbach Ott, who never failed to make Lewis smile.  He leaves behind three siblings, Francis T. (Terry) Kalmbach, Jr. and wife, Lynne, of Mandeville, LA, Ellen Kalmbach Tizian and husband, Karl-Heinz, and Samuel A. Kalmbach and wife, Leslie, both of Shreveport; and eleven nieces and nephews. Lewis is also survived by his biological daughter, Pia Nesbitt Sternad; and her parents, Tanya Herrera and Amy Sternad, of Davis, California; along with numerous aunts, uncles, and cousins and even more wonderful friends.

The family wishes to recognize and thank Ruby Jenkins and Sheldon Snow for their support.

Lewis had asked that Dolly Parton’s Imagination Library, The Dollywood Foundation, 111 E Main St, 2nd Floor, Sevierville, TN 37862 and the Philadelphia Center, 2020 Centenary Blvd, Shreveport, LA 71104, be considered by anyone wanting to donate in his memory.

To order memorial trees or send flowers to the family in memory of Lewis Kilbourne Forrester Kalmbach, please visit our flower store.