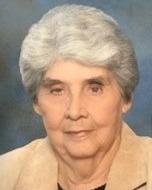 Marie Thornton was born May 2, 1932, in Many, Louisiana. She moved to Shreveport after graduating from Many High School in 1950 where she met Frank, her husband of 67 years. They were married on April 11, 1955, subsequent to Frank’s return from Naval service in Korea, and then moved to Houston, Texas where they spent the next four years before moving back to Shreveport to be closer to family members.

It was in Houston where Marie first joined South Central Bell Telephone Company, which would later become part of AT&T.  After transferring to Shreveport, she would go on to work for the company for nearly 30 years until her retirement in 1985.  In the early-1970’s she became the first female manager of the Shreveport office where she supervised the company’s coin telephone collection operation. Shortly after retirement, she and Frank moved to Stonewall, Louisiana where she managed the family businesses that included a cattle farm, rental property and oil and gas property on land that has been in the family since the early 1900’s.

As a strong-willed businesswoman, she was known for her decisiveness, keen instincts, and undeniable work ethic. As an individual, she was selfless, warm-hearted, and well-loved by many.  She was always more comfortable serving other people, rather than putting her interest first. As a member of Landmark Baptist Church, Marie was also very dedicated to her Christian faith.  Over the years she and Frank gave generously to many charitable causes and helped to support a number of needy families in the Stonewall area, often anonymously.

The family would like to extend their warm appreciation to the many friends for their love, support and prayers. The family is particularly grateful to the wonderful and caring staff at the Guest House skilled nursing facility.

A visitation will be held on Tuesday, December 13th, at Landmark Baptist Church in Stonewall, Louisiana beginning at 9:00 AM, followed by a funeral service at 11:00 AM. Burial will take place following the funeral at St. Ann’s Catholic Church cemetery in Stonewall.

To order memorial trees or send flowers to the family in memory of Jewel Marie Thornton, please visit our flower store.