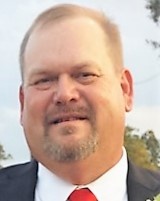 Funeral services for James Kevin Volentine will be held Friday, March 4, 2022, at 10:00 a.m. at Rose-Neath Funeral Home in Arcadia, Louisiana. Interment will follow at Tulip Cemetery in Athens. Brother Spencer Lovitt will officiate. The family will receive friends Thursday, March 3, 2022, at Rose-Neath in Arcadia from 5 p.m.- 8:00 p.m. James Kevin Volentine was born October 22, 1968, in Homer, Louisiana to Dan "Danny\" Millard and Evelyn Dianne Spurlock Volentine. He is survived by his children, Morgan Lee Volentine, Madelyn Faith Volentine and James Kaden Volentine of Haughton; his loving mother, Dianne Volentine of Athens; sister, Leann Chambers and husband Richard of Athens; many other relatives and friends. Kevin was preceded in death by his father, Dan "Danny" Millard Volentine; grandparents, Frederick "Fred" Dan and Sudie Bernice Lee Volentine and Clayton "Bud" M. and Evelyn Hicks Spurlock. Kevin graduated from Claiborne Academy in 1986. During his high school days Kevin loved to play football and participate in 4-H. Kevin's main 4-H projects involved livestock and he found his grand champion in a jersey cow named Texas T. Upon graduation Kevin started working on the family dairy farm learning the ins and outs of the dairy business. Later on, Kevin went to work at the Hill Farm Research Station where he worked in the dairy and poultry programs. It was during this time that Kevin decided to build poultry houses and he went into the poultry business with his sister. Kevin was a devoted son, brother and father. He enjoyed watching the LSU Tigers play football and had recently started watching LSU Gymnastics. Recently Kevin had started watching the series, Mystery at Blind Frog Ranch with his children on Friday nights and he only had one episode left to watch. We decided Kevin wanted to watch the season finale in Heaven with his dad. Kevin was a lifelong member of Mount Olive Baptist Church in the Crossroads Community. Just like his dad, Kevin loved to study and discuss the book of Revelation. The following verse became a favorite of Kevin during his ongoing struggle. "I have fought a good fight, I have finished the course, I have kept the faith." 2 Timothy 4:7 Pallbearers will be Ken Volentine, Rodney Volentine, Richard Head, Michael Head, Drew Head, Paul Cook, Greg Penix and Johnny Ackel.
To order memorial trees or send flowers to the family in memory of James Kevin Volentine, please visit our flower store.
Send a Sympathy Card