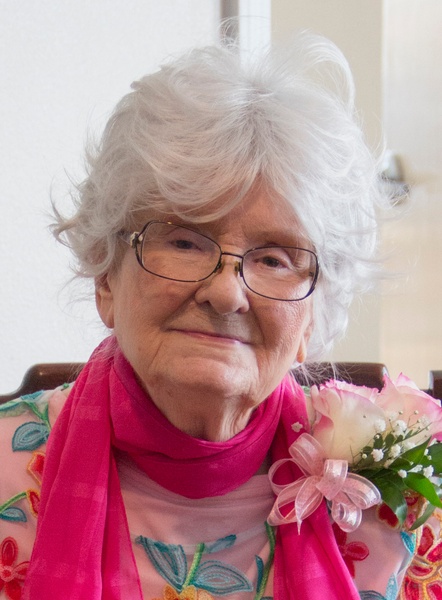 A celebration of the life of Geraldine Dolores Shaw Goss will be held Saturday, May 7, 2022, at 2:00 p.m. in the chapel of Rose-Neath funeral home in Minden, Louisiana with Bro. Bill Crider officiating. Visitation will be from Noon to 2 p.m. before the service. Following the service, burial will be at Providence Cemetery in Ringgold, Louisiana. Geraldine was born April 19, 1928, in Jamestown, Louisiana and was a long-time resident of Minden. The past two years she was a beloved resident of Savannah Grand in West Monroe, Louisiana where she entered her heavenly rest on Sunday, May 1, 2022. The treasures of her heart were her Lord, her church, and her family. She freely shared her talents as an artist with others and was delighted to pursue her journalistic interests on the First Baptist Church newsletter. She was preceded in death by her husband, James Walker Goss, her parents, Levia W. Shaw and Iva Nix Shaw, brother, B. L. Shaw, and sister Helen S. Lamborn. She is survived by her son, John W. Goss and his wife Betty of West Monroe, daughter, Ann E. Goss of Monroe, as well as grandchildren, David Shaw Goss of Portland, Oregon, Evan Beth Novotny and spouse David of Portland, Oregon, Aaron William Goss and spouse Heather of Redmond, Oregon, and James Daniel Goss and spouse Shelby of Monroe, and five great grandchildren. Pallbearers will be Daniel Goss, Aaron Goss, David Goss, Preston Lowder, Carlton Frye, Tyler Smeby, and Josh Polk. Rose-Neath Funeral Home 211 Murrell Street Minden, Louisiana 71055
To order memorial trees or send flowers to the family in memory of Geraldine Goss, please visit our flower store.