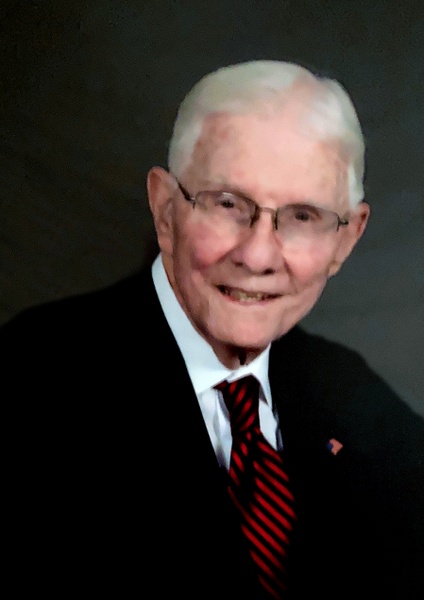 Funeral services honoring the life of Dr. Powell Alexander Layton will be held at 11:00 a.m., Saturday, July 16, 2022, at Trinity Heights Baptist Church, 3820 Old Mooringsport Road, Shreveport, Louisiana. Officiating the service will be Nick Roark, associate pastor of University Baptist Church in Fayetteville, Arkansas. A visitation will be held prior to the service from 10:00 a.m. until 11:00 a.m. at the church. Burial will immediately follow the service at Sand Hill Cemetery in Simms, Texas.

He grew up in Smithville, Texas and graduated from Smithville High School in 1940. He attended Southwest Texas State College in San Marcos, Texas and from there served in the United States Navy as a Naval Skipper (LCT 885) in WWII. In 1947, he married Dorotha Parker and finished his degree in Business Administration in 1948.  In the same year, he was named principal, teacher and coach at Belcher School in  Belcher, Louisiana and had his first child, Kathy Lynn Layton.

In 1955, he was named principal of Lakeshore Jr. High School in Shreveport, Louisiana and had his second child, Powell “Chip” A. Layton. In 1967 he was named principal at Northwood Jr./Sr. High School. In 1973, he was appointed Executive Director of the Caddo Teachers Association in Shreveport, Louisiana and in 1978 received his Ed. D. in Education Supervision at Northeast Louisiana University in Monroe, Louisiana. In 1980, he became an adjunct professor at Centenary College of Louisiana for over 20 years.

To order memorial trees or send flowers to the family in memory of Dr. Powell Alexander Layton, please visit our flower store.
Send a Sympathy Card