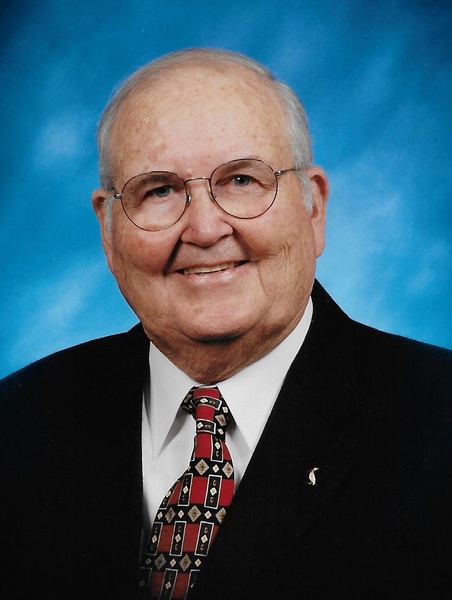 Bright blue eyes. A smile that seemed to stretch from ear to ear. That tenor voice which spoke words of love, encouragement, joy, and wisdom. A man many knew as Dr. Chapman, a friend we knew as Milt. Dr. Milton Charles Chapman passed from this life to enter into the Presence of his Lord Jesus, Saturday, February 12, 2022 as a result of complications from an acute episode of Covid-19. He had been surrounded by members of his family and faithful caregivers over the last two weeks of his life and passed away quietly and with peace at his home.

Born in Oakdale, Louisiana to M.C. and Virginia Chapman, he was the older brother to sister, Nan, and younger brother, Ron. Upon graduating from Mansfield High School in 1946, he began his studies at Louisiana State University in Baton Rouge. Entering the ROTC there, he excelled and upon graduating was given the unique honor of receiving a commission as an officer in the Air Force. Stationed at Langley AFB in Virginia, he met the love of his life, Betty Speegle, and they were married April 19, 1952. After five years of active service, of which three and a half were overseas in England, he entered medical school at Charity Hospital in New Orleans. By the time they moved to Shreveport to begin his rotating internship in preparation for his pediatric residency, they had three daughters, Tricia, Marcia, and Caroline. Mary E. would follow after he completed his residency.

He was recognized for his initiative and leadership at LSU; he was recognized in medical school and was selected to be included in the AOA Medical Honorary Society. He was also recognized in his internship, and subsequently received the Wyeth Pediatric Fellowship, one of 20 awarded in the U.S. annually. His interpersonal skills, pursuit of excellence, and leadership continued into his pediatric practice in Shreveport, Louisiana. He served as President of the Medical Staff at Schumpert Hospital, as well as President of the Shreveport Medical Society. He became a long-term delegate from Louisiana to the American Medical Society and was eventually elected President of the Louisiana State Medical Society. He served on many boards, including the Board of Supervisors for the LSU System, and was selected by three different governors to be on committees to advise regarding the Louisiana Public Health System. Over all this time, he sought to give his best for the well-being of all his patients, including his outreach to Holy Angels Residential Facility. After retirement from his pediatric practice, he continued to serve the Christus Schumpert Healthcare System, first as Senior Vice President of Medical Affairs, then as Chief Medical Officer. For his service, he was recognized as the LSU School of Medicine Alumnus of the Year in 1993, and Physician of the Year by the Shreveport Medical Society in 2013.

Beyond his service in the medical arena, he was also active in the Ark-La-Tex Ambassadors Club, and was elected chairman in 1979, the first physician to serve in that capacity. He was instrumental in seeing the Independence Bowl continue in Shreveport, Louisiana, and served as its chairman in 1980 and 1981. He also served in his church, Broadmoor United Methodist, giving of his time for many years to share his beautiful tenor voice in the choir. Later in life, he spent a year driving to Longview, Texas with a dozen other men to attend a weekly men's Bible Study Fellowship class, so that they could start their own men's class in Shreveport the following year. He served in leadership in that class for many years until he could no longer attend. His family, his patients, his fellow physicians, the practice of medicine, and his community were important to Milton. His friends, his country, and his church were a priority for him. Most importantly he knew Jesus Christ as his Savior and Lord. But for those who went fishing with him, or went to an LSU football game with him, you knew where his heart was, and he loved to share that heart with others.

The family would like to express their heartfelt thanks to caregivers Nancy and Ray Ambrose, for their dedicated loving service, tender care, and unquenchable spirit.

Visitation with the family will be available on Saturday, February 19, 2022 beginning at 10:00 a.m. at Broadmoor United Methodist Church, 3715 Youree Dr, Shreveport, Louisiana, followed by a Memorial Service of Celebration at 11:00 a.m. Masks will be provided.