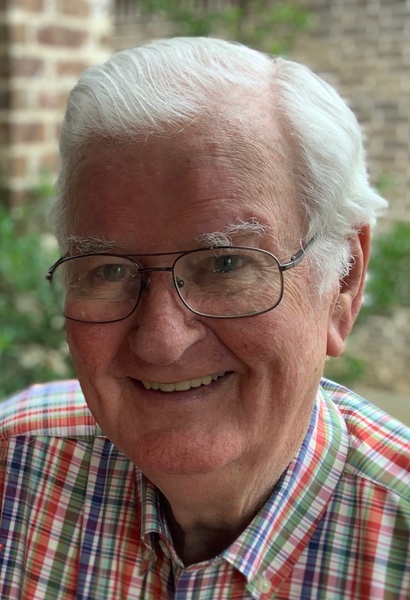 That a twelve-year-old boy who found an error on a reading test in 1944 and wrote to the test-maker, informing them that a spider is not an insect, would grow up to be a rocket scientist holding patents on two rocket boosters is perhaps no surprise, but to those who knew and loved him, Douglas Cecil Whitehurst never fell short of remarkable. He did not just build rockets. He served in the United States Air Force, created stunning pottery, welded magnificent chandeliers, could pluck a joke or Bible verse from memory on a dime, and showered anyone who crossed his path with attention and love. Indeed, you would never recognize the most brilliant man in the room by his demeanor, because his humility was outshone only by how much delight he took in others.

From inviting all of his grandchildren on an annual vacation to watch baseball spring training (complete with custom matching shirts—that he designed, of course), to ripping up the dance floor at any wedding reception, to giving math lessons on cocktail napkins (in the binary number system, naturally), he took such great joy in the world and its pleasures—baseball, math, outer space, dancing—and lived to share that joy with the people he loved.

Growing up on the oil fields of north Louisiana with his brothers, Charles and Bob, Doug’s love of reading and building model airplanes—including a life-size one, which he tested on the high school football field—led him to graduate valedictorian and study aeronautical engineering at Louisiana State University, where he was Wing Commander/Cadet Colonel of the military honor society the Pershing Rifles. After LSU, Doug married Nancy Carolyn Calhoun and entered the United States Air Force in Albuquerque, New Mexico. He then fathered three daughters, Clista Whitehurst Adkins, Tracie Whitehurst Woods, and Mary Evelyn Whitehurst.

As a new father and astrophysicist, Doug worked in the early missile and space programs in Huntsville, AL, at Red Stone Arsenal and the forerunner to NASA. Later, he’d demonstrate an invention of his to one of his grandchildren by referencing a child’s toy, the classic wooden figurine that collapses but snaps back into place when pulled taut by a string.

“I realized that’s how we’d get the booster into space!” he’d say with a smile.

Presenting his work to Dr. Wernher von Braun, the famous WWII German scientist who developed the USA’s space program, was a particular experience that Doug would never forget.

As a father, he imparted to his daughters the principles that would anchor his life: your word is your bond; integrity and character cannot be compromised; God can do anything; prayer is essential; there is no problem that does not have a solution; every job deserves the very best that you can give. He was always ready with a listening ear and a forgiving spirit.

On April 16, 1988, Doug married Marilyn Lewis Barineau and gained another daughter, Janie Lewis Richard, and a son, Huffman Lewis. Together, Doug and Marilyn traveled to far-flung places and never tired of new adventures. In retirement, they moved to Santa Fe, New Mexico, where Doug’s artistic side flourished. He set up a state-of-the-art workshop from which he produced intricate wooden bowls, magnificent iron chandeliers, exotic ice chests, and marble and metal sculptures.

Doug’s incredible brilliance and talent were matched by a fervent faith. As a scientist and artist, he viewed all the elements of the world and the universe as one mysterious creation, his deep and abiding sense of God’s presence—even in places yet to be discovered—leading him to study the Bible with the same intensity he used for rocket science. When his oldest daughter went to seminary, he bought and read every book on her assigned reading list.

At First Baptist Church Shreveport, Doug taught Sunday School, served as a deacon, led as Chairman of the Deacons on several occasions, gave his tithes and offerings faithfully, headed task forces and committees, worked on the search committee to call Dr. William Hull as pastor, and was an unfailing friend to ministerial staff. After he married Marilyn, Doug became a faithful and contributing member of St. Mark’s Episcopal Church, substitute-teaching for the Dean’s Bible Study, Dr. M. L. Agnew. At Holy Faith Episcopal Church in Santa Fe, Doug served on the vestry, led the ushers, restored the antique kneeling rail, created new standards for the crosses, and built the gift shop. He did these things with his trusted friend and “surrogate son,” Daniel Aguerre.

All his family know that Doug is happy to be with God. When he turned 70 years old, he announced to the family, “After your three score and ten (age 70 in the Bible), everything else is gravy.” So, at fourscore and ten (90), he was ready to join God whenever God got ready.  His family believes that God met Doug—also known as Dad and Gramps—with open arms and the words Dad longed to hear, “Well done, my good and faithful servant.”

During his time here, he left his mark not only on earth, but beyond it. Given that as a man, son, father, and grandfather, he was larger than life, it seems fitting that his memory will not only echo on in the hearts of those he leaves behind; it will echo, literally, into the stars.

Special thanks to Angel MedFlight, St. Joseph Hospice, the North Pavilion at the Oaks, Golden Gate Nursing, Divonna October, LaTonia Vawters, Jean Thomas, and the many friends and helpers who helped Doug in his last days in Shreveport.

A Memorial Service for Doug will be in the sanctuary at First Baptist Church, 543 Ockley Dr., Shreveport, Louisiana on Saturday, July 16, 2022 at 2:00 p.m. The family will greet friends in the Church Parlor following the service.  Doug will be inurned in Santa Fe, New Mexico, at Holy Faith Church at a later date. Officiating will be Dr. Jeff Raines.

To order memorial trees or send flowers to the family in memory of Douglas Cecil Whitehurst, please visit our flower store.