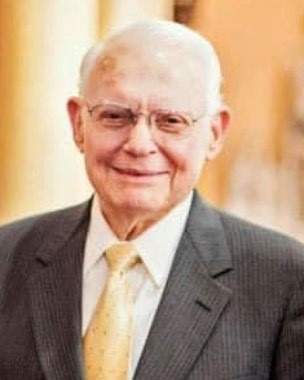 A Mass of Christian Burial honoring the life of Donald “Don” George Woodward, 91, will be held at 10:30 a.m. Friday, September 2, 2022, at Christ the King Catholic Church, 425 McCormick Street, Bossier City, Louisiana. Visitation will be held from 9:30 a.m. until the time of service. Burial to follow the mass at Rose-Neath Cemetery, 5185 Swan Lake Spur, Bossier City, Louisiana. Officiating the mass will be Father Fidel Mondragon.

Don attended LSU.  He married June Woodward on January 15, 1955, and was married to her for 67 years.  He was a member of the United States Navy for four years.  He served three years in Japan during the Korean War.  During his time in Japan, he worked under General MacArthur and was sent as a courier to the peace talks in Seoul, Korea.  After leaving the Navy, he worked for IBM Corporation for 16 years in various places across the country.  When he retired from IBM, he returned to Alexandria, Louisiana, where he opened the Louisiana Trophy and Awards Shop with his wife, June.  June and Don ran this store together for 20 years before retiring for good.  Don loved to spend his free time fishing.  He also loved music and could play many instruments, including the ukulele and the organ.  He was a life-long, die-hard fan of LSU Tiger Football and New Orleans Saints Football. He was a Eucharistic Minister and Reader at Christ the King Catholic Church.  He volunteered his time in many other ways for his church.  He was also a Fourth Degree Knight of Columbus.  Don never met a stranger and was always eager to make people laugh.  He was an exemplary husband, father, and grandfather.  Special thanks to Rick Fontenot, Kathleen DeLaune, and Tom Wimberly for their friendship.  Special thanks to June Bennett and the staff of Savannah Grand for their support.

In lieu of flowers the family suggests that memorials may be made to Christ the King Catholic Church, 425 McCormick Street, Bossier City, Louisiana 71111.

To order memorial trees or send flowers to the family in memory of Donald "Don" George Woodward, please visit our flower store.