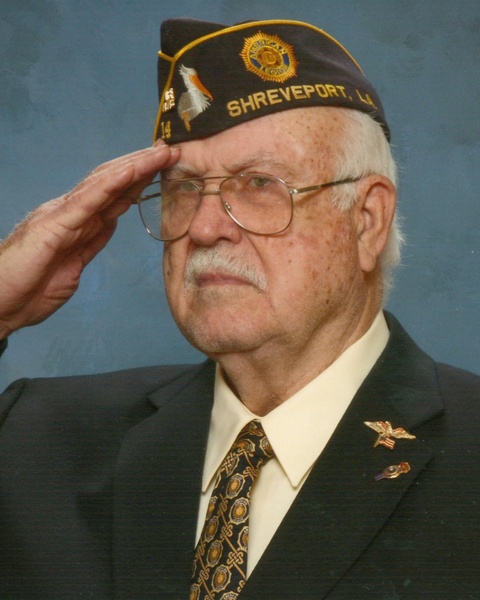 Carroll R. Michaud, Major, USAF Retired has made his “Final Roll Call” and he renders his “Final Salute” here on planet earth. The Supreme Commander has transferred him to the heavenly ranks. A graveside service with full military honors will be held on Wednesday, September 28, 2022 at 10:00 a.m. at the Northwest Louisiana Veterans Cemetery, 7970 Mike Clark Rd., Keithville, Louisiana.

Carroll was born January 22, 1933, in Hodge, Louisiana. He graduated from Jonesboro-Hodge High in May 1951. He held B.S. degrees from La. Tech 1955 and from Oklahoma  State 1965. He was a Texas registered professional engineer and held five certifications with the Louisiana Water Conference. He was the former Director of the City of Shreveport Office of Water & Sewerage.

Mr. Michaud retired from the U.S. Air Force in 1976, and from Fluor Daniel Inc. in Houston, Texas in 1998 where he worked as an engineering manager for 20 years. He and his wife, Gwen, returned to their Shreveport family home that year.  He was a world traveler having lived and worked in the Philippines, Japan, Ascension Island, Seychelles Islands, Korea, Saudi Arabia, Thailand, Kenya, South Africa and China. He participated in building oil, natural gas, sulfur, and chemical  processing plants, gasoline refineries, barracks, office and dining facilities around the world.

Mr. Michaud was a distinguished La. Tech ROTC graduate and was commissioned a 2nd Lieutenant in 1955. He flew F-86 Combat Air Patrols during the Quemoy-Matsu Crisis of 1958 and was awarded the Expeditionary Forces Medal. His flying career and promotion advancement ended when he submitted his resignation after being medically grounded in 1965. This being rejected, he was assigned as an Engineering/Test Officer in the DoD Joint Parachute Test Facility, El Centro, NAS, CA. He was on the project team that set a world record for the single heaviest parachute load ever dropped from an aircraft  (50,450 pounds). He also was on teams that tested the parachute system that landed a payload on planet Mars in 1976, that recovered nuclear bombs that were jettisoned from B-52s under emergency “safeguard” conditions, and that dropped the world's largest non-nuclear “Daisy-Cutter Bomb” in Vietnam, (15,000 tons of TNT). This work earned him the Air Force Commendation Medal.

He later served assignments as Commander and Senior U.S. Government Representative of the Millisle Tracking Base on Ascension Island and again at the Satellite Tracking and Communication Station in the Seychelles Islands. He again was awarded the Air Force Commendation and Meritorious Service Medals.

His penultimate assignment was to U.S. Army Dugway Proving Ground, Utah as the Air Force Liaison Officer, where he was awarded the U.S. Army Commendation Medal. There he assisted Project Streak Eagle that set eight new "Time-To-Climb" records with the F-15 Eagle aircraft in 1975. During this project he proposed a unique method for calibrating a ground radar unit, by tracking satellites. Mathematical documentation proving this concept was accepted by the Federation Aeronautic Institute in Paris, France. This was the first ever use of tracking multiple satellites to calibrate a radar at a fixed ground location.  This concept became the precursor to today’s global positioning system (GPS).

His last assignment was as Deputy Director, Electronic Programs, General Dynamics Plant, Ft. Worth, Texas. Mr. Michaud was an Eagle Scout and credits the Boy Scouts  for  preparing him for a life of adventure, hard work, community service and patriotism.

Carroll was active in local Veteran Organizations having served as Cmdr, Am.Legion Post 14, Chef ‘de Gare Voiture 137 of the 40&8, Sr. Vice Cmdr. VFW Post 2238, Chairman of the War Veterans Home Ancillary Cmte.  He was a life member of The Military Officers Association, the VFW, the DAV, the Am. Legion and the Air Force Association.

His deep appreciation for his fellow veterans is expressed in his poem “Final Roll Call” which is displayed along with the Liberty Bench and the Liberty Elm Tree that he and his wife donated at the Veterans Memorial Park on Clyde Fant Parkway.

The family suggests, in lieu of flowers, memorials may be made to any children’s charity for which Carroll had a special place in his heart. He particularly liked St. Jude Children’s Research Hospital in Memphis, Tennessee.

To order memorial trees or send flowers to the family in memory of Carroll Richard Michaud, please visit our flower store.