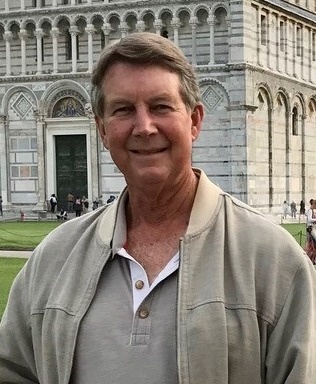 A memorial service honoring the life of Bruce Newton Lynn, age 71, will be held at 11:00 a.m., Friday, August 12, 2022, at Rose-Neath Funeral Home, 1815 Marshall St., Shreveport, LA. Officiating will be Reverend Gene Bryson.  Visitation will be held prior to the service beginning at 10:00 a.m. and a reception will follow at the funeral home.

Bruce was born on September 10, 1950, and grew up on the family farm in Gilliam, LA.  After graduating from Jesuit High School, he attended Texas A&M University, where he was a member of the Corps of Cadets. He was selected to be a member of the Ross Volunteers, in which he served as a member of the honor guard for the governor of Texas and for King Rex at Mardi Gras in New Orleans. Bruce was part of the Ross Volunteers’ firing squad and commander of Company C-1. A proud graduate of the Fightin’ Texas Aggie Class of 1972, he served in the U.S. Army and the National Guard. After graduation he returned to the family farm where he followed his passion and established his own successful farming operation. He was completing his 50th crop year upon his death.

Bruce was an active member of Gilliam United Methodist Church and was always happy to serve and support the Gilliam community. Over the past 20 years, he has been an avid participant of the Shreveport/Bossier dance community, even competing in regional dance competitions. There were some years that you could expect to find him out dancing “eight” nights a week. Bruce loved spending time with friends and family especially his children and grandchildren.

Preceding him in death are parents, Bruce and Margaret Lynn, as well as his beloved son, Ross Lynn.  Bruce is survived by his son, Newt Lynn and wife, Kristy; daughter, Lesley Johnson and husband, Jeremy; grandchildren, Matilda, Clementine, Miles and Conrad; sister, Pamela Broesamle and husband, Peter.  Other loved ones include Jane and Tucker Watts, as well as recent companion, Carole Pruett.

As his fellow Aggie so aptly wrote, “The world needs more Bruce Lynns. He will be missed.”

The family suggests memorials may be made to the Ross Lynn Charitable Foundation (Click Here) at P.O. Box 905, Ruston, LA 71273 or a charity of the donor’s choice.

To order memorial trees or send flowers to the family in memory of Bruce Newton Lynn, Jr., please visit our flower store.