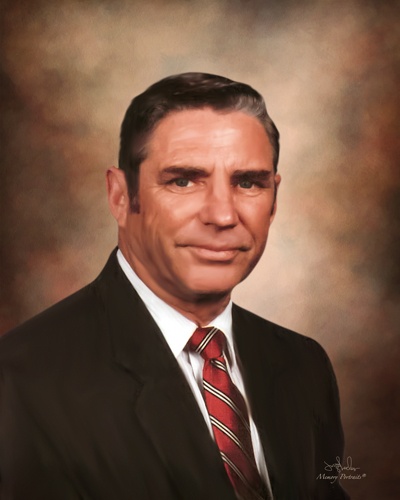 Visitation for Billy "Bill" Ray Bradford, 90, will be held from 12:00 p.m. until 1:00p.m. Thursday, December 23, 2021 at Rose-Neath Funeral, 2201 Airline Drive, Bossier City, Louisiana. Graveside service at Hill Crest Memorial Park, 601 US-80 East, Haughton, Louisiana will be held at 1:30 p.m. Officiating will be Brother Robert Finley. Bill was born September 12, 1931 to Lee Bradford and Eula Smith Bradford in Fort Gibson, Oklahoma and passed on from this life, peacefully in his sleep in the early morning hours Monday, December 20, 2021 in Bossier City. He was ready to meet his Savior face to face and then be reunited with the love of his life, his wife Mary who passed away November 29, 2013. Bill joined the Air Force in 1949 and was stationed at Bryan Air Force Base. Bill served four years in the Air Force and met the love of his life, Mary while stationed in Bryan, Texas. They were married for 60 years. Bill owned several companies over the years which included Surplus City, Inc., Cebradco, Inc., Vintage Car Company, Bradford Engine & Equipment Sales & Service. Inc., Bradford Enterprises, Inc., Bradford Properties, L.L.C and his crowning achievement for over forty-five years, Crown Dental Studio, Inc. Bill enjoyed life to the fullest and traveled the world with his beloved Mary, children, and friends. He had his pilot\'s license and owned his own plane for many years. Bill was also a member of the Hang-Gliding Association, Inc. He was a member of the Sports Car Club of America\'s Formula Vee circuit. For seven years he raced coast to coast until his retirement from racing in 1976. He raced with the likes of a young Rick Mears who went on to race Indy Cars and Paul Newman. After retirement, Bill enjoyed being an extra in the movies filmed in the Shreveport, LA area. He was in "The East", "Snitch", "The Iceman", "Olympus Has Fallen" and the television series, "Salem." Bill had the most amazing ability to enjoy life and loved throwing a party and spending time with his children, family and friends. Bill is proceeded in death by his parents; his brothers, Lee Bradford, Ben Bradford, Vernon Bradford, Don Bradford, Dale Bradford; sisters, Lucille Bradford and Valerie Bradford. Bill is survived by his daughters, Laura Harris and husband Ollie, Connie Logue, Johanna Wilbanks and husband Dr. Edd L. Wilbanks; son, David Bradford and wife, Glenda; grandchildren, Kenny Burgess, Dr. Brandy Burgess, Sandi Stambaugh, Mandy Logue, Michelle Rethage, Matt Wilbanks, Jennifer Davenport, Hunter Bradford, Andrea Chevalier, Jennifer Harbaugh, Elizabeth Bradford and Erin Bradford, 14 great-grandchildren; and his brother, Dan Bradford. Honoring Bill as pallbearers will be his grandson, Hunter Bradford and nephews, Donny Bradford, Jeff Bradford, Mike Bradford, Pete Bradford and Tim Bradford. Serving as honorary pallbearers will be Allen Atkins, Dr. Russell Cecola and Sam Falloon. The family would like to thank the nurses from Willis-Knighton Hospice and his loving caregivers for the last four months. In lieu of flowers the family suggest memorial may be made to your local Alzheimer's association, 831 Kings Hwy #120 Shreveport, Louisiana 71104.
To order memorial trees or send flowers to the family in memory of Billy Bradford, please visit our flower store.
Send a Sympathy Card