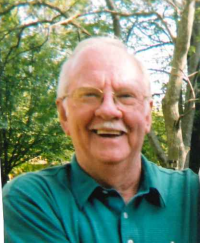 A Graveside inurnment service honoring the life of Alton Lloyd James, 90, will be held on Monday, December 27, 2021 at 10:00 a.m. at Grand Cane Cemetery in Grand Cane, Louisiana. Officiating the service will be Pastor David Hazelwood and Pastor Mike Scott. Alton was born to Robert Lowery James and Elma Louise James on October 25, 1931 in Wesson, Mississippi and entered into eternal rest on December 22, 2021 in Grand Cane, Louisiana. Mr. Alton James was a resident of Grand Cane and worked as a manager for the International Paper Company before retiring. He served on the Board of Directors at Progressive National Bank and was a former chairman of the board of the Council on Aging. He was in the National Guard and was a Shriner in the Masons. A faithful follower of Christ, Mr. James was a member of Grand Cane Baptist Church. He was adored and will be deeply missed by his wife of 73 years, his 4 loving children, 10 grandchildren, and 21 great-grandchildren. Alton was preceded in death by his parents; son-in-law, Joel Allen, and great-granddaughter Brycee Jo Burkett. Left to cherish his memory are his wife, Kathleen James; sister, Patsy Ainsworth; son, Alton Lloyd James, Jr and wife, Suzanne; daughter, Judy Hazelwood and husband, David, Kathy Boobar and husband, Tim, and Lori Strange; grandchildren, Stacey March, Carol Sutton, Micah Hazelwood, Daniel Hazelwood, Samuel James, Holly Knight, Janie Jo Burkett, Jacob Allen, Caleb Strange, and Mallory Keen; 21 great-grandchildren, and a host of nieces and nephews. The family would like to express special thanks to the Grand Cane Baptist Church for their support during this time. They would also like to express sincere gratitude to Mr. James' nurses and aids, specifically Ms. Carla Meyers.
To order memorial trees or send flowers to the family in memory of Alton Lloyd James, please visit our flower store.
Send a Sympathy Card