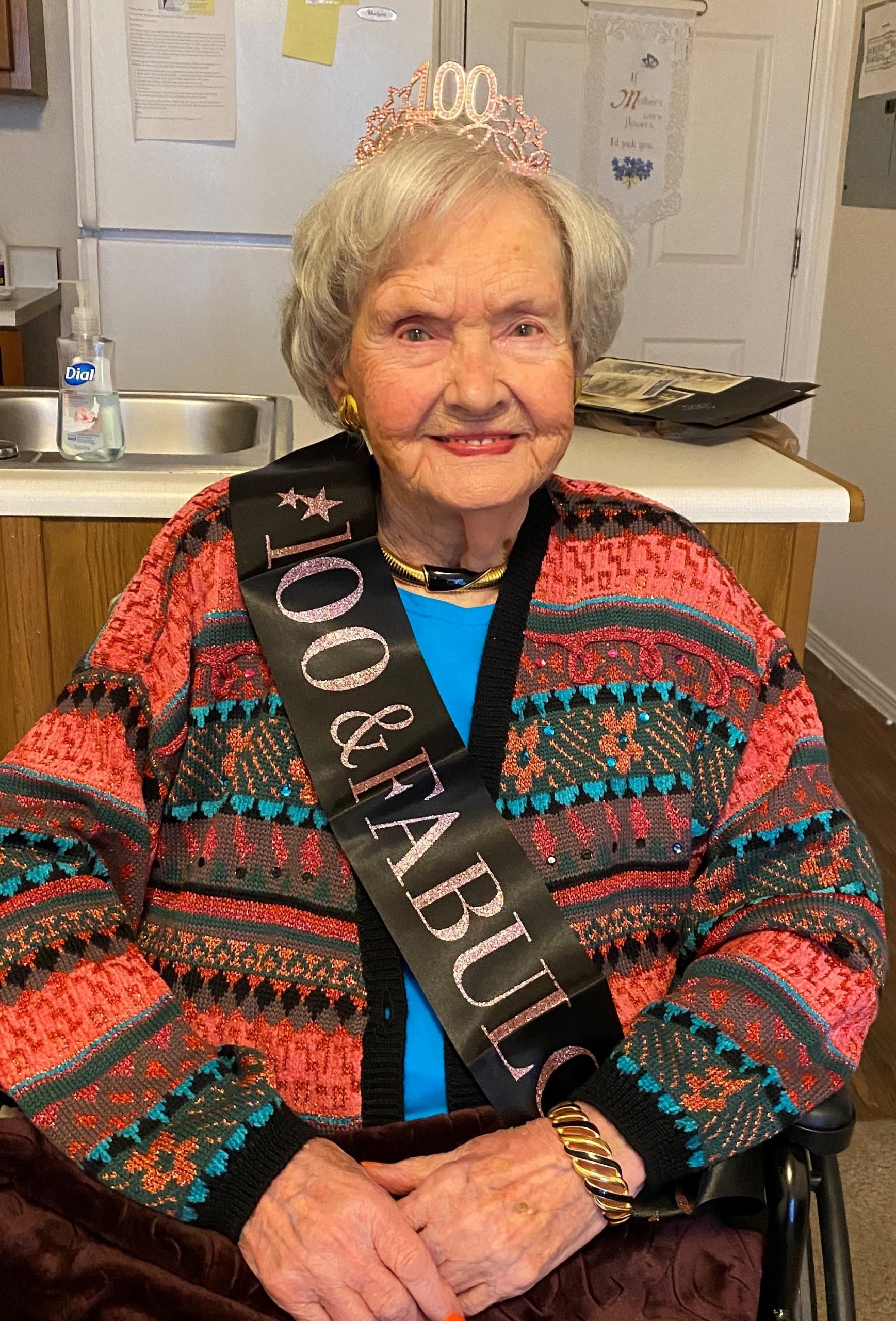 Funeral services for Alida Lambeth Stevens will be held at Rose-Neath Funeral Home, 1815 Marshall St., Shreveport, Louisiana on Sunday, January 23, 2022 at 3:00 p.m. A visitation will be held from 2:00 p.m. until service time. Interment will be held at Forest Park Cemetery, St. Vincent. Officiating the service will be Dr. Larry Williams.

Alida was born October 17, 1921 in a large plantation house just south of Bossier City, Louisiana, where she was raised and attended school in Bossier City. She graduated from Bossier High School and was a member of the Homecoming Court. She attended Normal State College that is now Northwestern State University in Natchitoches, Louisiana and was a member of the Alpha Sigma Alpha sorority.

Alida married her high school sweetheart, Allen R. Stevens, who served in the armed forces after college. During World War II the couple lived in Macon, Georgia and Little Rock, Arkansas, before Allen shipped overseas to Europe. While living in Macon, Georgia, their daughter, Marsha, was born.

Alida was employed by Interstate Oil Pipe Line Company, which later became Humble Oil and is now Exxon as Executive Secretary to the Manager of Operations. After the company's headquarters moved to Houston, Alida was employed by Western Electric Company as Administrative Assistant to the General Manager.

After retiring, Alida was active in many civic organizations. She was President of the Broadmoor Homemakers Club for many years, President of the Caddo Parish Homemakers Council, Regent of Pelican Chapter, Daughters of the American Revolution, Chairman of Christian Women's Club, Vice President of Broadmoor Garden Club and holds membership in Exxon Annuitants Club. She was a Tour Host for International World Tours, Kerrville, Texas and formed her own tours for several years.

Alida is a 58 year member of Broadmoor Baptist Church and was President of Baptist Women, Women Missionary Union for several terms. She taught Sunday school in the 6 year old department and served as class President of her Sunday school class for many years. She was also Program Chairman for Senior Adult Monthly Meetings for a number of years and Chairman of the Christian Women's Club. She has been a Prayer Coordinator in the prayer room since its inception.

While she served as President of W.M.U. she received many State and National awards. She was Centennial Chairman from Broadmoor Baptist and formed a tour to Richmond, Virginia to attend a National Convention. While there, the quilt she took, made by Broadmoor Baptist women, won 1st place and a blue ribbon. It now hangs encased in the church. She also had flags made representing each nation where Southern Baptist Missionaries serve. They are used in the "Parade of Flags".

While serving as Regent for Pelican Chapter, N.S.D.A.R., her chapter won many State and National awards. Alida enjoyed traveling, reading and gardening. She has a collection of many souvenirs from each state and foreign country she traveled in. Alida defined elegance. She was always dressed to perfection when she stepped out.

She was preceded in death by her husband, Allen R. Stevens; parents, James Talbert and Alida H. Lambeth; brother, Will Lambeth and sister, Anna Mae Stracener.

To order memorial trees or send flowers to the family in memory of Alida Lambeth Stevens, please visit our flower store.
Send a Sympathy Card